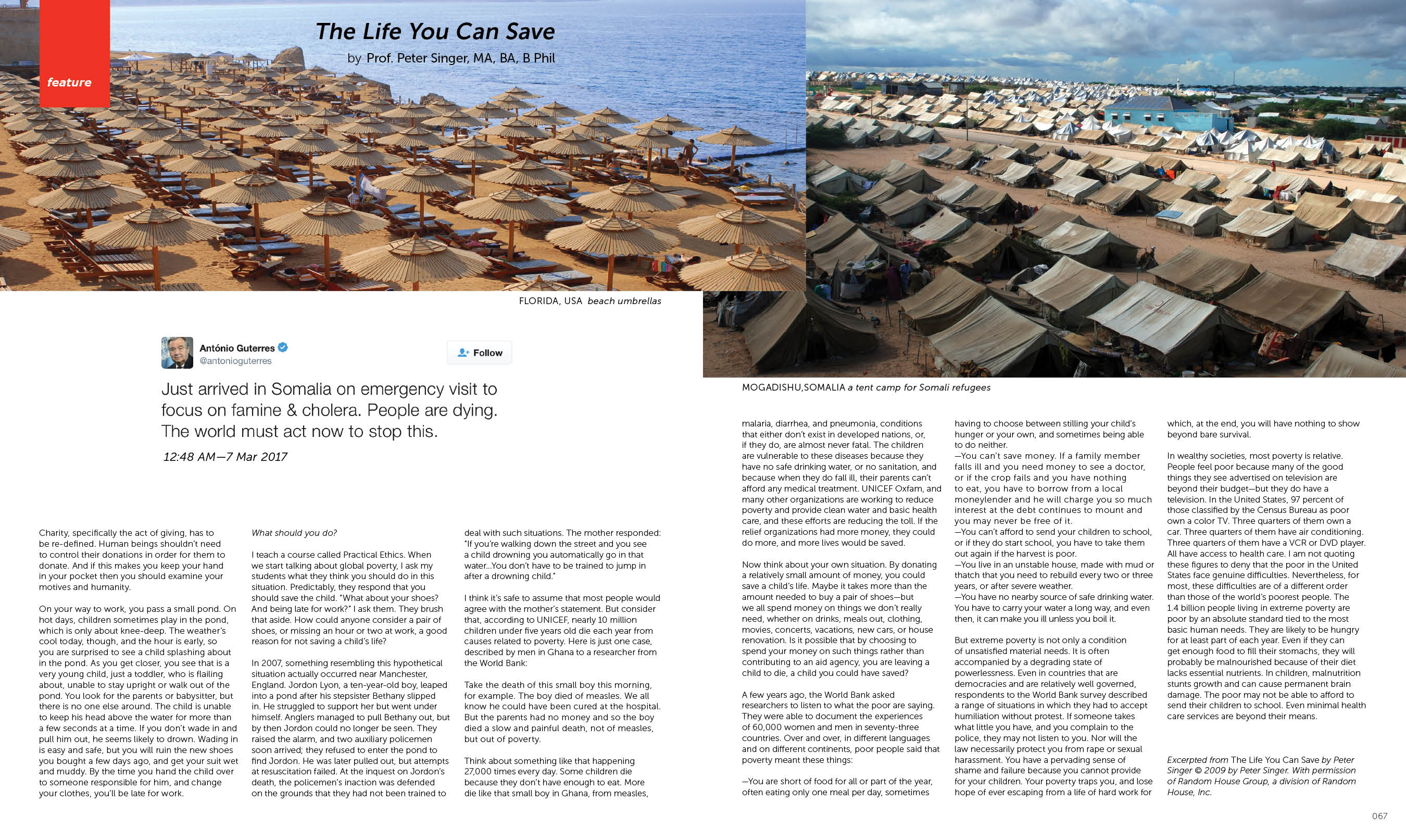 Charity, specifically the act of giving, has to be re-defined. Human beings shouldn’t need to control their donations in order for them to donate. And if this makes you keep your hand in your pocket then you should examine your motives and humanity.

On your way to work, you pass a small pond. On hot days, children sometimes play in the pond, which is only about knee-deep. The weather’s cool today, though, and the hour is early, so you are surprised to see a child splashing about in the pond. As you get closer, you see that is a very young child, just a toddler, who is flailing about, unable to stay upright or walk out of the pond. You look for the parents or babysitter, but there is no one else around. The child is unable to keep his head above the water for more than a few seconds at a time. If you don’t wade in and pull him out, he seems likely to drown. Wading in is easy and safe, but you will ruin the new shoes you bought a few days ago, and get your suit wet and muddy. By the time you hand the child over to someone responsible for him, and change your clothes, you’ll be late for work.
What should you do?

I teach a course called Practical Ethics. When we start talking about global poverty, I ask my students what they think you should do in this situation. Predictably, they respond that you should save the child. “What about your shoes? And being late for work?” I ask them. They brush that aside. How could anyone consider a pair of shoes, or missing an hour or two at work, a good reason for not saving a child’s life?

In 2007, something resembling this hypothetical situation actually occurred near Manchester, England. Jordon Lyon, a ten-year-old boy, leaped into a pond after his stepsister Bethany slipped in. He struggled to support her but went under himself. Anglers managed to pull Bethany out, but by then Jordon could no longer be seen. They raised the alarm, and two auxiliary policemen soon arrived; they refused to enter the pond to find Jordon. He was later pulled out, but attempts at resuscitation failed. At the inquest on Jordon’s death, the policemen’s inaction was defended on the grounds that they had not been trained to deal with such situations. The mother responded: “If you’re walking down the street and you see a child drowning you automatically go in that water…You don’t have to be trained to jump in after a drowning child.”

I think it’s safe to assume that most people would agree with the mother’s statement. But consider that, according to UNICEF, nearly 10 million children under five years old die each year from causes related to poverty. Here is just one case, described by men in Ghana to a researcher from the World Bank:

Take the death of this small boy this morning, for example. The boy died of measles. We all know he could have been cured at the hospital. But the parents had no money and so the boy died a slow and painful death, not of measles, but out of poverty.

Think about something like that happening 27,000 times every day. Some children die because they don’t have enough to eat. More die like that small boy in Ghana, from measles, malaria, diarrhea, and pneumonia, conditions that either don’t exist in developed nations, or, if they do, are almost never fatal. The children are vulnerable to these diseases because they have no safe drinking water, or no sanitation, and because when they do fall ill, their parents can’t afford any medical treatment. UNICEF Oxfam, and many other organizations are working to reduce poverty and provide clean water and basic health care, and these efforts are reducing the toll. If the relief organizations had more money, they could do more, and more lives would be saved.

Now think about your own situation. By donating a relatively small amount of money, you could save a child’s life. Maybe it takes more than the amount needed to buy a pair of shoes—but we all spend money on things we don’t really need, whether on drinks, meals out, clothing, movies, concerts, vacations, new cars, or house renovation. Is it possible that by choosing to spend your money on such things rather than contributing to an aid agency, you are leaving a child to die, a child you could have saved?

A few years ago, the World Bank asked researchers to listen to what the poor are saying. They were able to document the experiences of 60,000 women and men in seventy-three countries. Over and over, in different languages and on different continents, poor people said that poverty meant these things:

—You are short of food for all or part of the year, often eating only one meal per day, sometimes having to choose between stilling your child’s hunger or your own, and sometimes being able to do neither.
—You can’t save money. If a family member falls ill and you need money to see a doctor, or if the crop fails and you have nothing to eat, you have to borrow from a local moneylender and he will charge you so much interest at the debt continues to mount and you may never be free of it.
—You can’t afford to send your children to school, or if they do start school, you have to take them out again if the harvest is poor.
—You live in an unstable house, made with mud or thatch that you need to rebuild every two or three years, or after severe weather.
—You have no nearby source of safe drinking water. You have to carry your water a long way, and even then, it can make you ill unless you boil it.

But extreme poverty is not only a condition of unsatisfied material needs. It is often accompanied by a degrading state of powerlessness. Even in countries that are democracies and are relatively well governed, respondents to the World Bank survey described a range of situations in which they had to accept humiliation without protest. If someone takes what little you have, and you complain to the police, they may not listen to you. Nor will the law necessarily protect you from rape or sexual harassment. You have a pervading sense of shame and failure because you cannot provide for your children. Your poverty traps you, and lose hope of ever escaping from a life of hard work for which, at the end, you will have nothing to show beyond bare survival.

In wealthy societies, most poverty is relative. People feel poor because many of the good things they see advertised on television are beyond their budget—but they do have a television. In the United States, 97 percent of those classified by the Census Bureau as poor own a color TV. Three quarters of them own a car. Three quarters of them have air conditioning. Three quarters of them have a VCR or DVD player. All have access to health care. I am not quoting these figures to deny that the poor in the United States face genuine difficulties. Nevertheless, for most, these difficulties are of a different order than those of the world’s poorest people. The 1.4 billion people living in extreme poverty are poor by an absolute standard tied to the most basic human needs. They are likely to be hungry for at least part of each year. Even if they can get enough food to fill their stomachs, they will probably be malnourished because of their diet lacks essential nutrients. In children, malnutrition stunts growth and can cause permanent brain damage. The poor may not be able to afford to send their children to school. Even minimal health care services are beyond their means.

“All You Need Is Love”

No any image found. Please check it again or try with another instagram account.
Join us April 22nd 4pm EST to listen in to our panel Cinema, Science and STEAM: ‘The SciFi Conundrum’ that is part… https://t.co/mwrzcuKAd0

Reply Retweet Favorite
Join us April 22nd 4pm EST to listen in to our panel Cinema, Science and STEAM: ‘The SciFi Conundrum’ that is part… https://t.co/kKS3U2QlEB

Reply Retweet Favorite
Join us April 22nd 4pm EST to listen in to our panel Cinema, Science and STEAM: ‘The SciFi Conundrum’ that is part… https://t.co/k0rFJ5dmGE

Reply Retweet Favorite
Join us April 22nd 4pm EST to listen in to our panel Cinema, Science and STEAM: ‘The SciFi Conundrum’ that is part… https://t.co/0KoML7TCMc

Reply Retweet Favorite
👏  Former national TV host for NBC and Univision @marianaatencio will be joining our #MovesForum Panel as she discu… https://t.co/X3vlgJDPxY